When a player is playing a game of roulette with one green pocket, the odds are better than playing on a wheel with two pockets with a 00 number. In fact, the house edge percentage is 5.26% on double zero or American roulette and 2.70% on single zero or European roulette. This means players lose more money per hour when the house has a higher advantage, especially on outside bets such as the red or black bet. There really is no advantage to playing double zero roulette. The house edge is greater is every single bet on the table. 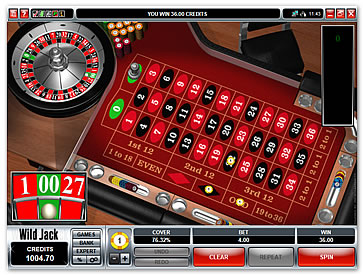 In American roulette the casino has two green spots holding a single zero and a double zero spot, which gives the house a 5.26% edge over the player and a wheel that contains a total of 38 pockets. If you are a player who likes to only wager outside bets such as the black or red bet, then European roulette is the best roulette wheel to play on to get the best edge possible over the casino.

In some cases, double zero roulette can be a better choice than the single zero game if the La Partage or En prison rules are in play. This would be one of the key selling points to playing in a game that obviously has worse odds. The La Partage rule lets players lose only half their bet when the ball lands on zero. Even better, the En prison rule will actually give players an option of taking half the bet off the table when the ball lands on zero.

En prison or also known as "in prison" means that if the ball lands on a zero or double zero a second time, then the player loses all of the bet. If the ball lands on the zeros just the first time, nothing happens. This rule combined with single zero roulette gives the players some of the best odds possible in roulette! The trick is finding a casino that offers these rules.

Many players would prefer to play double zero roulette. Nearly all online casinos offer this game. There is an advantage for some players though. Some casinos offer the surrender option in their American roulette games. Even though there are two zeros on the wheel, the ball can land on a zero and the player will receive half of the original bet back, which is known as roulette surrender.

This type of rule is also common in a variation of the game known as VIP roulette, which returns half of the bet if the ball lands on a zero or double zero. In some cases, this VIP version plays using the European rule or with a single zero and gives the players one of the biggest edges possible in roulette. Check out the online casino list over at lol casino for nearly 100 different casinos that offer double zero roulette and which ones rank for the best sign up promotions. Keep in mind that all casinos listed on this page are US friendly and accept US players.

Play roulette online at CasinoMax - US Players and Credit Card Deposits Accepted. Play for real money or for practice.